November 11
The bo0ki3
click link to read the posted review

Glancing up, he saw Maddie and Abe approaching at a near run. The urgency in her step, and that look on her face—a mix of worry and fear, like she expected trouble—alerted him.

He got the picture. Blabbermouth Mark was telling him something he wasn’t supposed to know until she got here to explain, because she didn’t think he’d approve. She was playing him. She was going to try to talk him into doing something she was sure he didn’t want to do. Damn. He was going to enjoy this, but it nettled him a little. Her opinion of him was pretty low if she thought he’d object to a birthday party for Abe. And why the hell should he care what she thought?

Because you want her, stupid. But to get her, she has to return the want. For sure, giving her a hard time isn’t going to get you anywhere.

Eyebrow raised, head cocked to one side, he watched through narrowed eyes as she slowed her pace to a saunter and replaced her worried look with a casual smile.

“Why, Gideon. What a nice surprise to find you here,” she said.

He stared without commenting, liking the little flicker of doubt in her expression.

“But Maddie,” Mark said, “you knew he was here. Remember we saw Uncle Gid’s truck outside?”

She glanced at Mark, clearly exasperated, not saying what Gideon knew was on the tip of her tongue.
Abe said it for her. “Shut up, Mark.”

Sighing, she gave Gideon a falsely sweet smile and fluttered her eyelashes. “I see that Mark told you about Abe’s birthday party.”

“What about it?” He wanted to laugh. He barely managed a glare.

She gazed at him, trying to hide her unease at his response. “Well, it was the funniest thing,” she said, brimming with false enthusiasm, waiting for him to smile in return.

Eyes narrowed, he studied her. His silence was making her fidget.

Damn, she had a beautiful mouth—that lower lip distended softly in a coaxing pout. He imagined taking it between his own lips and pulling on it gently. She’d taste as sweet as strawberries warmed by the sun. Her voice faded. He was lost in a sensual haze that would have him agreeing to anything as long as he could taste that mouth.

“Doris Potter and Genevra Wilson are going to do most of the planning, but I worry about where we’re going to put all those people. Is there some way we can set up tables?”

All those people? Tables? He tried to remember what she’d said, but he hadn’t heard a word. Alarmed, he demanded, “How many people have you invited?”

“Uh, well, I guess most of the town. Genevra said the Spartman barbecue was an annual tradition, perfect for Abe’s birthday party. It’s two weeks from today, but all we have to do is supply beer and sodas and the barbecued beef,” she said.

He stared at her, aghast. “Hell, Maddie, we can’t do this. There could be two hundred people here. Do you know what that would cost? We can’t afford a party like that right now. We’re low on cash this time of the year.”

Her hand was on his arm, patting it soothingly. Sparks of electricity shot along his flesh, clear to his brain, took an awesome bounce and shot toward his groin.

“I’ll pay for it, Gideon. The party is my idea, and I can easily afford it. It’s the least I can do. After all, we’re partners, aren’t we?”

Easily afford it? Irritated because he suspected, vaguely, that his manhood might have been insulted, he geared up to retaliate, but then he caught the cruelly disappointed expression on Abe’s face and changed course. If she wanted to pay for it, why not? How much money did she make, anyhow?

He’d almost accepted the idea when reality hit him. He couldn’t host a party for the whole town. He didn’t know shit about parties or where to begin. He’d make a damn fool of himself. Ask him to kill a man with his bare hands, lead a strike force, or take out a target with a rifle at a thousand yards—yeah, he could do that—but throw a party with the whole town looking on? God, no.

Posted by Tribute Books at 12:18 PM No comments: 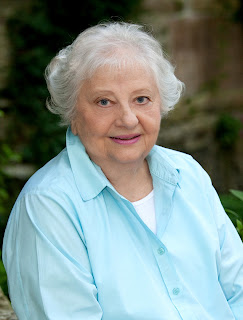 Bio:
Joyce Zeller has written articles for a magazine and a cooking column for a chain of suburban newspapers north of Chicago. She has written five books and published two, The Hidden History of Eureka Springs, and Accidental Alien, a work of science fiction, both available on Amazon. Her short story, “Love is a Seed,” is featured in Embrace: A Romance Collection, (2012 Goldmine Press). Joyce has served in the United States Army. As a professional perfumer (School of Perfumery, London, England) and an aroma-therapist, she made custom fragrances in her store. Her creation, Mountain Air, was declared the Arkansas Sesquicentennial Fragrance in 1965. Her latest achievement was getting elected as Alderman to the Eureka Springs City Council. Maddie’s Choice is a romance with her favorite theme, that being human is a lonely business, but for everyone there is somebody to love. It’s a matter of finding them. There will always be kids and animals in her books, and always, humor, “because life without humor is unthinkable.” 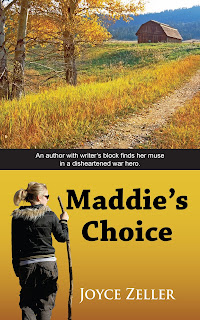 Summary:
Romance writer Maddie Taylor is fed up with New York City. She is getting nowhere with her latest manuscript and does not believe true love exists outside of her imagination. When a friend, Jonah Spartman, dies and wills her half of his Arkansas cattle ranch, she sees the chance for a new beginning. Jonah has also left behind two orphaned great-grandsons desperate for affection and an accounting book in the red.

The other half of the failing ranch belongs to Gideon Spartman, Jonah’s grandson, who believes all capacity for love was torn from him during his tour of duty in Afghanistan. Rugged and sexy, Gideon is the enthralling physical manifestation of the hero in Maddie’s current manuscript. He is far from happy to be sharing an inheritance that is rightfully his. As she senses the need behind Gideon’s rough and unwelcoming exterior, Maddie acknowledges her own yearning for love and family.

Jonah’s will requires Maddie to stay on the ranch for three months. When that time is up, will she return to her comfortable but emotionally barren existence or embrace the challenges of her new life, which include cattle rustlers and drug dealers? Maddie’s choice proves to be far from simple.

Reviews:
“A bull hooked on chocolate plays the hero in this love story of two people struggling to restore their destroyed lives. Maddie’s Choice is a touching family story that will have readers laughing and crying simultaneously. Zeller has created flawed but sympathetic characters and a bucolic setting that will appeal to readers of all ages. A must read for anyone who has ever dreamed of living on a ranch. As Maddie is fond of reminding herself, ‘How hard can it be?’”
—Velda Brotherton, author of western historical romances

“Joyce has walked the walk with her Western romance set on a cattle ranch. Good read!”
—Dusty Richards, Spur winning author of more than 120 western novels, many under the name, Josh Logan